Two weeks ago I promised you a Reading part 2 blog. I wrote that blog but on reflection decided not to post it. I went into why I thought I underperformed at Reading but by the time I was happy with what I had written I was into race week for the World Half and the last thing I wanted to do was be posting up a negative blog.

Instead I’ll start this blog with a quick summary of what I think caused my below par perfomance. I believe it came down to two things;

1) I got things wrong on my return from Kenya. I usually come back from Kenya and start my taper for a marathon meaning, I do very little running compared to what I have been doing out there. This time I came back and tried to keep the volume a little higher until the Wednesday before the race. I now believe that this was too much stress on my system as my body was trying to readapt to coming back down to sea level leaving me feeling sluggish and lathergic on race day.

2) When I came back from Kenya I was weiging in at what I call ‘race weight’. Whilst over there we had ate a healthy diet which was very much carb based which is needed considering the miles I was putting in. I’m not normally too focussed on my weight and tend to measure things on how I feel rather than what the scales say but we had been carefully monitored whilst out in Kenya as weight loss can be very detrimental to you over there.

On returning home I became conscious of reducing my eating in order to not risk putting on a few extra pounds. I’m not sure why I did this but I began to restrict my carb intake. Again I think that come race day that this had a negative effect as it left me with insufficent fuel to feed my performing muscles. Admittedly, it was a stupid thing to do and something which I have never done before or will again.

I am usually very good with my eating and eat a very healthy balanced diet. I am one of those who won’t deny myself anything, if I fancy a chocolate bar or a burger I will have one, I just wont have two or three a day! Some people think that when you run 110 miles a week you can afford to eat whatever you want but I look at it as you wouldn’t fuel your Ferrari on Diesel. If you want to perform at a high level you need to fuel your body to a high level.

So thats my reasonings behind my below par run at Reading. Of course I am happy to admit that it may actually be neither of these reasons and I just wasnt good enough on the day. As my fellow competitor and winner at Reading said the other week ‘some times we are sh*t and we just don’t know why’. Luckily though I managed to turn it around when it mattered and last weekend I travelled over to Copenhagen as part of the Great Britain team to take part in the IAAF World Half Marathon Championships. 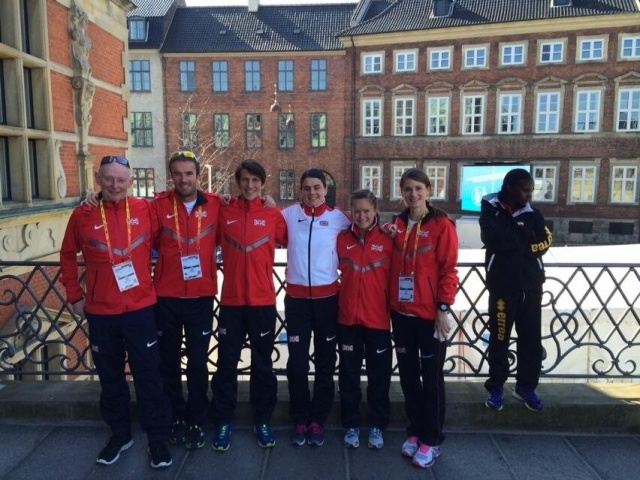 Great Britain and Northern Ireland team before the races

I last ran these championships back in 2009 when they were held in Birmingham. That was my first GB vest and I finished in 45th position in a time of 75.19. This time round was a slightly different story. I went into the race on the back of my disappointing run at Reading Half Marathon but knowing that I was in great shape. In the weeks leading up to the race training suggested that I was in PB shape and I was really excited to get out and see what I could do.

As race week approached I began to feel really sluggish and struggled on runs. My immediate reaction was that I was going to have a rerun of Reading and under perform. This is the last thing I wanted considering I was about to pull on the red, white and blue vest of Great Britain. I had o do myself justice. My last session on Tuesday morning before the race I had to stop after 1.5miles, walk for 30seconds and give myself a good talking to before getting going again and running a strong 6 mile tempo.

I always say that feeling rubbish like this in the lead up to a race is a good thing as it stops you from over doing things in the last few days as if you feel good you are tempted to push on when you don’t need to. However, when your race is the World Champs you do start to doubt yourself a little when you are feeling like this.

Luckily for me everything turned out well on the day. Because I had been feeling so rubbish and had woken up with a sore throat on the two days previous to the race I decided to just go out and run hard and see what happens. I wore my watch but I didn’t look at any splits until after I had finished. The only time which I saw mid race was my 10k split on the roadside clock. I’ll admit I did get a shock when I saw the clock ticking over 33.06 as the pace didn’t feel that quick. 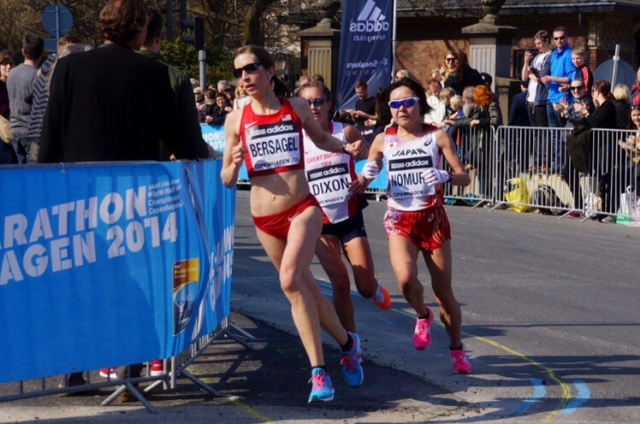 Sitting in the pack mid way through the race

The course was pancake flat, the conditions were near perfect and the crowd were amazing. I settled in with a Japanese girl from early on and was happy to just sit behind her for as long as possible. Just before 10k we caught a small group containing an American, a Norwegian, an Algerian and a girl from Peru. We went straight through this group and the American girl came with us. When I saw the 10k split I told myself to just keep it going, stick with the Japanese girl for as long as possible – the last few kilometres were going to hurt but get on with it.

Looking at my splits after the race I was pretty consistent. After the quick start 5k of 16.27 I then settled into 2 5k splits of 16.40 before slowing between 15 and 20k to 17.05 which interestingly most people dropped 10-20 seconds in this 5k so it may be something to do with the twist and turns and cobbles of the course in this section. My lowest position in the race was 29th at 5km. From this point onwards I only overtook people; no-one came past me until the last 1km when I suffered a bit and the Japanese girl ran away from me. I was running at my top end whereas she was still slightly outside her PB pace.

I crossed the line in 18th position in a time of 70.38 a PB by 41 seconds! I was absolutely elated. Its moments like this that makes all of your hard work worthwhile. 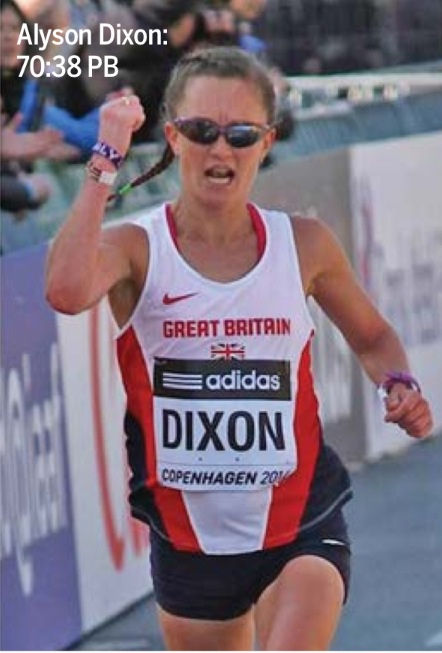 Crossing the line with a celebratory air punch

On reflection I think that the feeling rubbish the week leading up to the race did actually help me. It took the pressure off me to go out and chase times and worry about splits etc. instead I just went out and ran hard.

I always tell people that you should learn something from every race you do and for me the lesson I learnt on Saturday is don’t let yourself be dictated to by your watch. Sometimes it’s good to just go out there and run and see where it gets you. This is the second time that I have done this and on both occasions I have come away running beyond my own expectations and recording big PBs so there must be something in it! Too often we limit ourselves by setting splits and panic if we are too far ahead of these splits early on. I wouldn’t recommend it in the marathon but in shorter distances its worth just running and forgetting about splits, even if you go too hard too soon you could still grab a good PB. 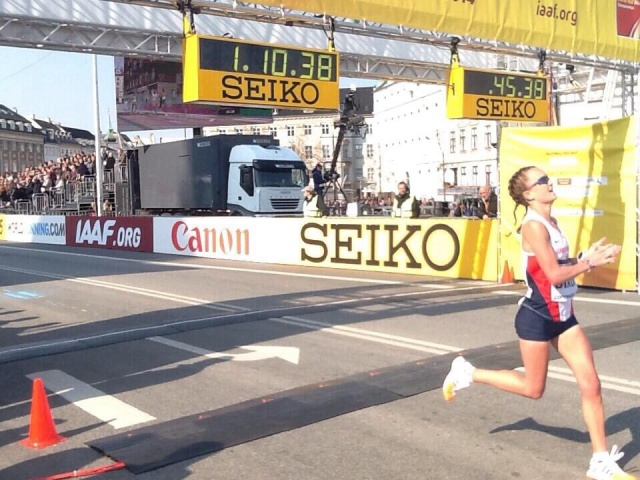 If you’re happy and you know it clap your hand…

Next up for me is Brighton 10k this Sunday and then I’m going to take a week off to recharge. Ive done a lot of hard training since the start of the year and I’ve had some ups and downs mentally so I feel I need to recharge the batteries both physically and emotionally ready to start marathon training again in early May.

At the end of my rest week I am travelling down to the London Mini Marathon as part of the team management for the North East team. This is something I am really looking forward to as I would love to get more involved in this side of things as I wind down my racing. Although this might be a few years yet as Saturday proved that there is still life in the old dog and with the next World Half being held in Cardiff in 2016 and the World Champs being held in London in 2017 I might have to carry on for a few more years yet! 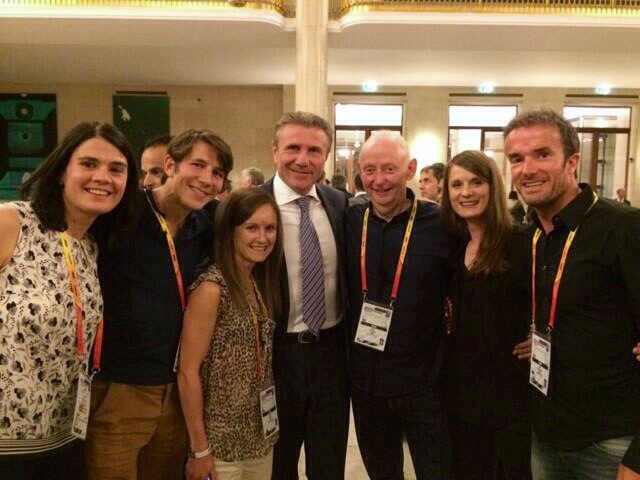 Chilling with Sergy Bubka at the post race banquet