Leading the Commonwealth Games Marathon for 15km and feeling awesome whilst doing so is an experience which I will never forget. The next 4 miles are something which I also never want to forget but for completely different reasons.

I watched the mens marathon start 28minutes before us and loved that Steve Way had a 5 meters lead on the field after about 2 minutes of running. I said to my team mates “if I’m in the lead at any point in the first mile please shout at me” little did i know that I would actually end up there for nearly an hour!

I’d studied the field beforehand and thought if I played things right on the day that I could be in with an outside chance of a medal. From the training I had done I knew I was in PB shape and looking at past results from Commonwealth marathons that would put me in with as good a chance of a medal as anyone.

As we settled into the race I found myself at the front of the group leading it out alongside Susan Partridge. Susan and I have raced against each other on numerous occasions and I knew that she was also in great shape and looking for a medal. We rolled along to the superb cheers of the crowds churning out 5.48minute mile splits and I was honestly feeling like I was jogging. There was a few sections where we hit a little bit of a headwind and on one or two occasion I did look round to the pack to see if anyone wanted to come forward to help at the front. Of course no-on offered, so I happily carried on leading.

I had hoped that the people of Glasgow would support the race well and they certainly did. People lined the streets with flags and banners, including at least 3 which I saw with my name on. Going through the City Centre and the parks was amazing. The crowds were so big and loud that they made your ears pop.

Unfortunately for me, Pollok Park is where it all started to go wrong. The amount of training you put your body through to make sure that you are in the best possible shape come a big race always leaves you walking a tightrope of fitness and injury. Entering Pollok Park I overstepped that line.

I felt my right achilles start to tighten but I tried my best to ignore it and hoped that it would disappear as quickly as it had came on. Unfortunately it didnt. I pushed on a little through the park and on the rolling hills managed to break our lead group down from 10 to 7 as we left the park. At the 15k feed station the Kenyans put in a burst which instantly dropped myself, Susan, Lanni (Marchant) and Jess (Trengrove). But as the pace picked up, so did the pain in my achilles. I knew I couldn’t sustain the faster pace (it was a 5.23 split) and my achilles wasn’t liking that I was up on my toes that little bit more trying to run faster so I made the conscious decision to ease back down to my own more comfortable pace. The next two miles were much more realistic pace for me but I was still badly aware of my achilles. The pain grew and grew to the point where I was struggling to land the foot without being in extreme pain. This was not in the race plan!!

Approaching 12 miles and all I could think about was the pain in my achilles. I was running in the Commonwealth Games Marathon and failing to finish was becoming more and more of a reality. I spent the next mile and a bit fighting with myself, trying to convince my body that it was ok and the pain wasn’t real. I only had another 13.1 miles to run, I could get through it.

Running through the start/finish area to enter the 2nd lap was one of the worst things ever. The crowds were huge and extremely loud and instead of being able to soak it all in and enjoy it here I was crying my eyes out and visibly limping and in distress.

About 1km into the second lap I stopped to try and stretch the achilles. It gave me slight relief but within 5 strides of starting up again the pain was unbearable. I hobbled for a little longer before it got to the point where I couldn’t actually put my foot down and I knew it was game over.

I went to my knees in floods of tears, my world crashing down around me. I was inconsolable. My dreams of a Commonwealth medal had turned into the nightmare of letting everyone down.m

A volunteer tried to help me up but someone in the crowd stopped them. Through my sobs I heard someone say “Aly, its Mara” It wasn’t until I managed to control the tears enough and get myself off the course that I realised I had stopped right in front of Mara Yamauchi.

Mara helped me into a nearby cafe and rang the England team management to let them know what had happened and request the Dr or Physio to come up and see me. The physio eventually got there and strapped me up before taking me back to the medical centre and then on to the Village. As soon as we got back to the village I was taken into the polyclinic for a scan.

Thankfully the scan didn’t show up any achilles damage but there was a lot of swelling and fluid between the paratendon and the achilles. I was given really strong pain relief and anti-inflammitories and given crutches to use to not over load the achilles. 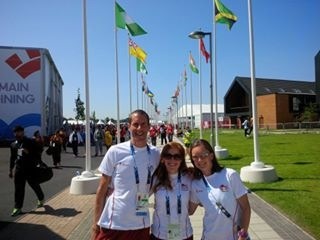 The good news is that we have some of the best medical support here with us so I am getting intensive treatment twice daily which is ensuring a speedy recovery. Ive already been able to ditch the crutches as the pain and swelling has gone down. I’ve been in for another scan to double check everything. The 2nd scan has shown up some tendonopathy in both Achilles with the left one being the worst and showing a 60% thickening of the tendon. Thankfully I can still get back into running again after my planned 2 week break, but it will be a very gradual increase in miles starting with small runs and lots of swimming/cycling.

It’s now been 6 days since the marathon and whilst the Achilles pain has subsided the pain in my heart hasn’t. I will always be happy and proud to have made it this far but I will also be forever gutted with the outcome of the race. I have no plans to stop though and I’ll use the disappointment from this race to fuel future success. I like the sound of racing in China, Brazil and England over the next 3 years and who knows maybe even Australia in 4 years. We’ve got two great athletes in Jo and Helen who are proving that age is just a number so as long as my body behaves itself I’m willing to give the next four years a good old go! 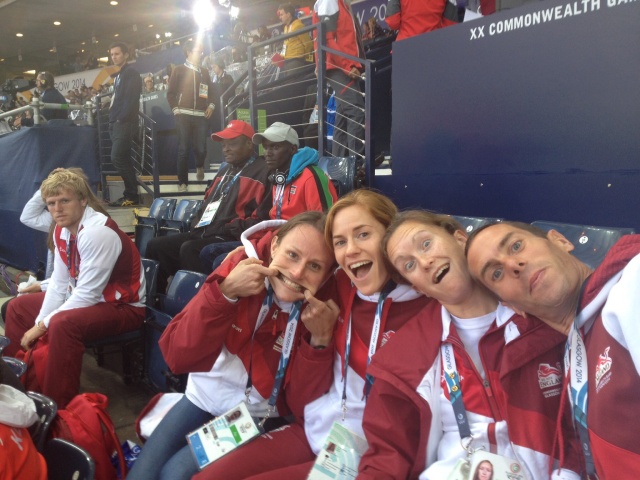 In the meantime, I am loving the rest of the games. I’ve been down to the stadium to watch fellow athletes and it was great on Tuesday night watching the 10,000m where my roomie and fellow North East athlete Kate Avery had an awesome run to finish 4th and another North East athlete Laura Weightman ran excellent to take silver in the 1500m. I couldn’t be more proud of these two having watched them race and improve through the ranks since they were under 13, its great to know that North East distance running is in safe hands for the next championship cycles.

I’ve no immediate race plans just yet, but I will be back out there as soon as I can. I would love to be able to run the GNR in some capacity but I’ll have to wait and see how the Achilles responds once I start running again.

I’ll sign off with once more saying a HUGE MASSIVE THANK YOU to everyone who has taken the time to send me messages of well wishes and support pre/during/post the race. I honestly thought I had let everyone and my country down on Sunday but you lot have been great in making me realise that I didn’t and that you are all very proud of me for making it to where I am. I know there are trolls and hater out there but at the end of the day this just show that you have successful and these people are more jealous than anything.