Growing up in the North East the Great North Run has always been a big thing.  Whenever people find out that you are a runner the first thing they ask is ‘have you done the Great North Run’ it doesn’t matter if you are a sprinter or a distance runner, you get asked it a lot round here.

For years I’ve went down to the finish line and stood and watched the finishers. The sense of exhaustion and triumph on their faces as they crossed the line is great. The emotion of those runners for great causes, many inspired by personally tragedy shows that this run is much more than just a race of who is fastest. It’s a run for the masses. The elites are really just the sideshow.

Those who have ran the GNR always say how fantastic the crowds are and what a brilliant atmosphere the run has – a 13.1mile party.  Until this year my experiences of the race where slightly different to most peoples. In previous years I have ran the GNR starting with the elite women’s field.  As we get a 25minute ‘head start’ on the rest of the runners we get a different experience of the race.  We get bussed in to the start where we have our own special warm up area and toilets. We don’t have to hand our bags over until about 15 minutes before we start and we can get to the start line with just 10 minutes to go and still get a prime position on the front with no standing around in cramped pens for over an hour.

The downside to running with the elites is that the crowds haven’t built up along the route so when most runners report back about fantastic crowds and the party atmosphere, for me as an elite runner; it is more of an everyday half marathon.  Yes, because it is a North East institution, it holds a bit more honour to me.  Being able to tell locals that I once finished 8th in the Great North Run holds a lot more prestige than saying I finished 19th in the World Championships! 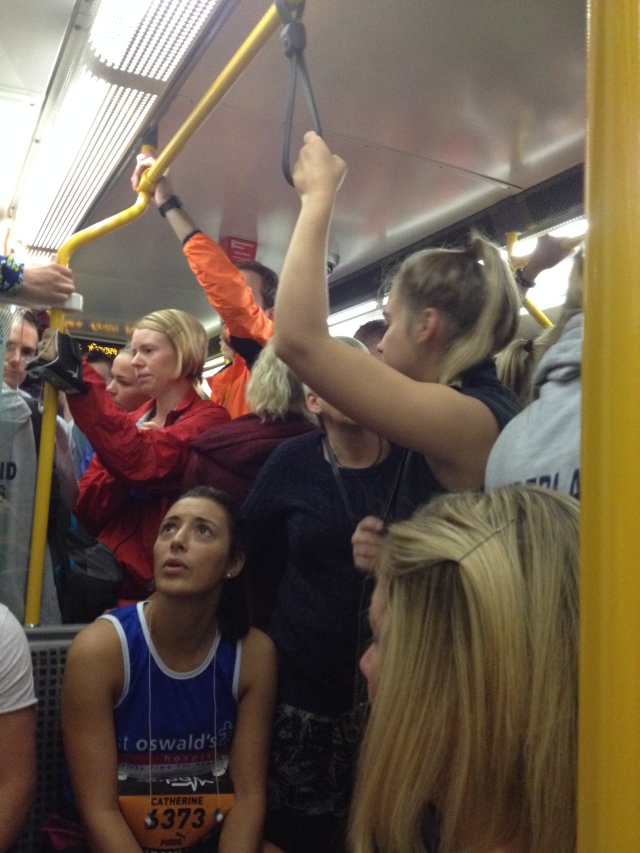 Runners playing sardines on the Metro from Sunderland to Newcastle

With picking up an injury in Glasgow, I knew that I wasn’t in shape to race the GNR, I hadn’t manage to complete a full week of running since then, so I requested that I could use my number to run in with the ‘masses’ and run around with some of the lads I am coaching.  One of the lads was looking for sub 80 minutes but he has a really bad habit of going off far too fast so I said I would run with him at 6.05 pace for as long as I could manage to help him run a more controlled race.

I was really looking forward to the whole experience. From getting Metro through to the high 5’s and oggy oggy oggys around the course, I knew that if doing this didn’t help me fall back in love with running then nothing would! 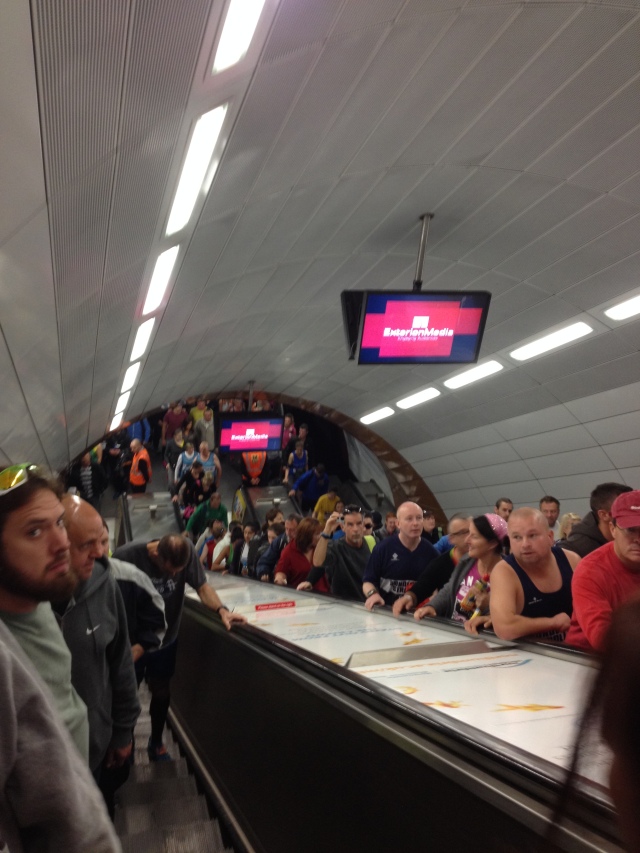 The whole day was amazing. I’ve never seen so many people on one Metro!  Hundreds of runner nervously chatting and laughing discussing time targets and charity fundraising, I sat and soaked it all in.  One advantage of having run in the elite race is knowing where the ‘secret’ toilets are. Andy had also found these in the past once we got to the start area we heading over to a queue less and more pleasant toilet stop!

As soon as we started heading down the central motorway I noticed the difference in the size of the crowds.  I commented to the lads around me that the women normally only have one man and his dog at this point! Coming onto the Tyne Bridge the crowds were huge but my Sweatshop Running Community runner, Jacqui, managed to spot me and give me a massive shout and the first of my many waves and high 5’s!

I totally loved the run. I did what I said I would do and kept Andy at the right pace for him to record a massive 8 MINUTE PB!  Apart from struggling a little on the hill between 10.5-11.5 mile I spent my time high 5’ing, clapping and squirting the kids in the crowd with water – it was a warm day after all!  By the time I finished my hands were sorer than my feet. The crowds were so much bigger than any other time I had ran it.  I know fully understand why people describe it as a 13.1mile party.  I finished with a massive grin on my face having loved every step.

Had I ran with the elites and still ran the time I did, I would have won some prize money, nothing life changing but a nice little bit of pocket money.  Yeah, that would have been great, but for me this run wasn’t about winning prizes or seeing how fast I could go. It was about getting out there and soaking up the atmosphere of the day, experiencing what nearly 1,00,00 runners before me had experienced and ENJOYING it! It might sound cheesy but it did remind me why I love running and no amount of money could buy that!

When I finished I stood and watched for the millionth finisher to cross the line.  The fact that the run was the first running event in the WORLD to ever record 1,000,000 finishers says great deal about the event. And show what a great event it is (pardon the pun!)  Ok, not everyone will have had a brilliant experience, I know one that didn’t, but 1,000,000 people can’t be wrong! 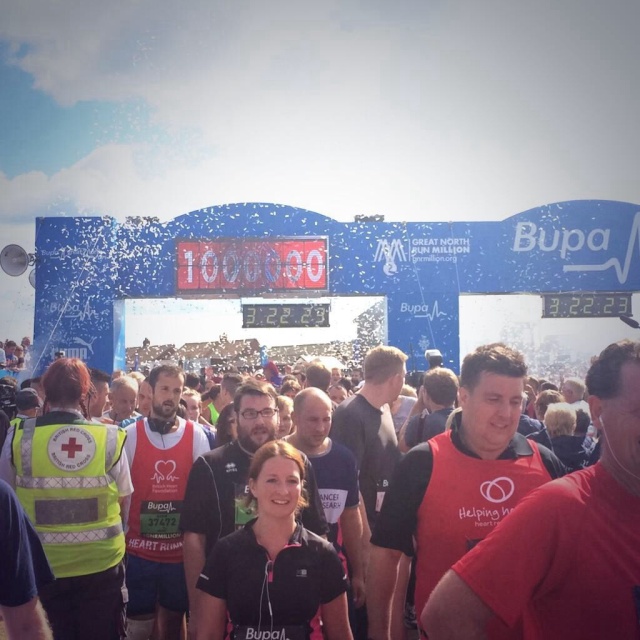 So, yes, the GNR did what I had hoped it would and it helped me fall back in love with running.  Since then I have managed to put two good weeks of training together.  I’m still doing most of my morning training on the cross trainers but this is slowly getting less and less whilst the miles are building up.  I still nowhere near the fitness I would like to be but I’m going to jump into the deep end and run the Northern Road Relays for my club tomorrow.  There’s nothing like a race to help bring on your fitness.  I am fully expecting to get my butt well and truly kicked but that’s something which I am willing to take at this point to help me move forward and closer to my goals for the rest of the year and early next year. 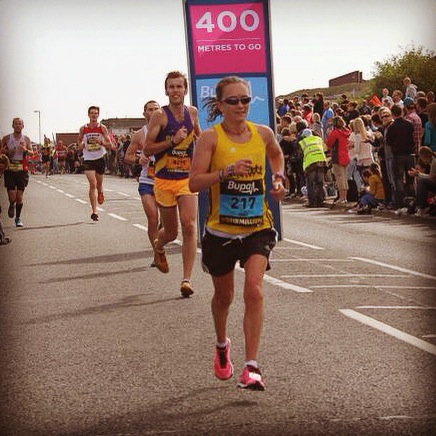 400m to go and still smiling – not often you say that at this stage in a half marathon!