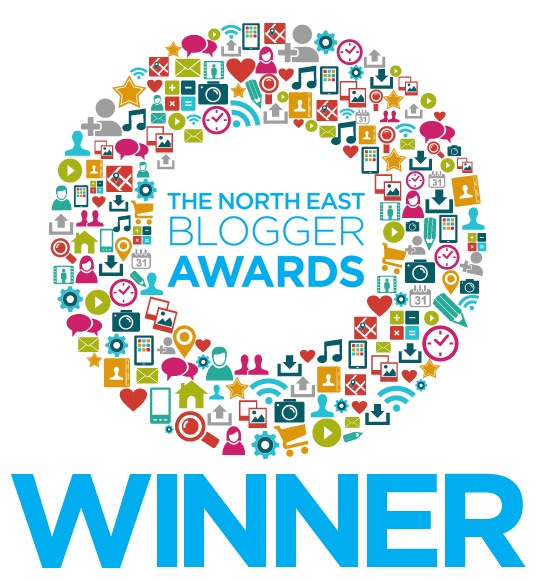 It is with great pleasure and surprise that I can say that you are now reading an AWARD WINNING blog! Yes you read that correctly, this blog has won an award!

A few weeks ago I received an email to say that I had been nominated and short listed for Sports Blog of the Year at the North East Bloggers Awards.  The ceremony was held at Lane 7 in Newcastle last Wednesday.  There were 10 different categories covering everything from sport to students to parenting to business and then an overall Blog of the Year. It was a great night listening to about everyone else’s blogs and needless to say I was a tad shocked when it got to the sports category and after those famous word ‘and the winner is..’ they announced my name! But I was very happy to accept the award.

When I started this blog I never expected to be nominated for an award, I wasn’t even sure if people would read it, but apparently they do and it’s great to know that people appreciate the work I put in to it so thank you to those who nominated and voted for me.  I know I haven’t updated it much lately but to be honest I haven’t had much to say and due to increased work commitments I haven’t had much time to sit and write.

Being presented with my award

My blog isn’t intended as a step by step race report site or to go into great detail on my training.  Not that that is bad, I actually enjoy reading blogs about peoples training. But instead I want to use it to show people the ups and downs of racing and training to a high level. To share with you the good times when it all goes to plan and you run a PB or gain selection to a major champs but also the heart ache of everything going wrong and not achieving your goals.

I know some people think that those who write blogs are just arrogant and egotistical and that’s fine everyone is entitled to their own opinion and if they don’t like it then they just don’t read it, simples.  I don’t think I’m either of those things.  I’m quite a shy person so I try to keep away from the me me me topic but that can be hard when you are writing about your experiences.  One thing I don’t do is pretend to be someone I am not. I write in my own style and try to portrait who I am by doing so.  I don’t conform to the grammar police, I’m rubbish at grammar!  I may use ‘alyisms’ and a lot of Mackem words/phases, but that is me and that is what I want the reader to see. By the feedback I have received, most of you enjoy what I do. 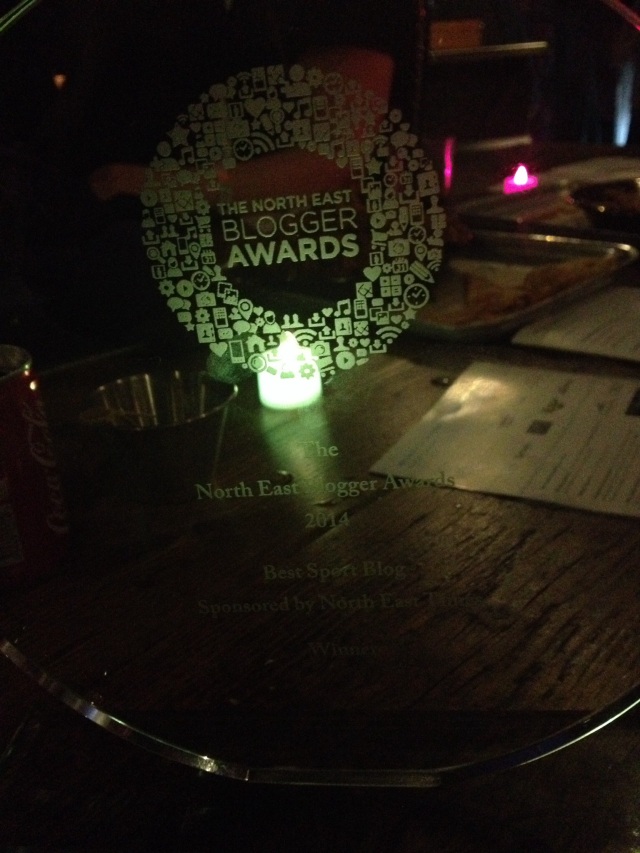 My award (not the greatest picture but it was dark!)

Well with that bit of good news over on to a me bit with a quick update on how things are progressing.  I have eventually found the cause of the niggly Achilles and rather embarrassingly it has all been down to a change in shoes! Yes, I know my day job is to advise people in the correct shoe for them by using gait analysis technology. So you’d think that I would know better than to wear the wrong shoe.  But no, since April I have been wearing a shoe which hasn’t allowed my foot to plant correctly and was causing my Achilles to bow every time my foot struck the ground which as you can imagine, wasn’t doing it much good!

This isn’t the injury which caused me to stop in Glasgow, that was finally diagnosed as a torn Tibialis Posterior (right leg), which has now healed fully.  The left Achilles, the one I tore last year, had been a bit niggly since the beginning of marathon training and I had just put it down to wear and tear of increasing my miles again.

About a fortnight ago I went down to Salford University to see Chris Bramah who conducted a full biomechanical assessment on me and found that it was the trainers I was wearing that was causing the trouble. He gave me some drills to help me improve my neurological pathways and fine tune my running technique.  I have always thought and been told that I have horrible technique but Chris says that the results he got show that my technique isn’t too bad. Yes, I’m knock kneed, but I am working on improving that and I have seen a big improvement since I began a proper strength and conditioning programme 2 years ago. But other than that it wasn’t as bad as I thought it would be.

Following Chris’ recommendation I ordered some different shoes when I got home and started wearing them as soon as they came two days later and since then I have honestly not had an ounce of pain from the Achilles and have now managed to put together two weeks of 90 miles plus some decent sessions and tempos.  Hopefully that is the end of the Achilles niggles and I can build on from where I currently am and start to get some decent fitness back.

I’ve raced twice in the last few weeks, both cross country. I can confirm that I still HATE cross country but I’m hoping that it will help strengthen my legs and ankles which in turn will help me run a fast marathon when I decide to go back to them.  My next ‘big’ race is Leeds Abbey Dash three weeks today where I have been selected to represent England.  Abbey Dash was in my plans anyway but to be given the chance to pull on the red and white vest again after the disappointment of Glasgow is great and hopefully I can put in a good performance to help erase the demon of Glasgow.