Another altitude camp is done and dusted. 6 weeks up in the French Pyrenees has flown by. On a whole the camp has been a really positive one. I’ve put together some really good training, lots of miles and some strong workouts and I’m feeling really fit and strong. As always, I am extremely grateful and thankful to British Athletics for providing these training opportunities and to Steve, Paula, Gareth, Graeme and Alex for all of their help and support during the camp.

Unfortunately week 5 was a bit of a bad week though. I’d ran my longest run of the training block (26.2 miles) the previous day and felt really great on it. A nice negative split and a solid time considering the terrain and elevation. Next day though I woke up not feeling brilliant. My heart rate was elevated and I had a bit of a sore throat so I cancelled training for the day and took a rest day.

Lac Matemale – a beautiful place for both running and relaxing

I spent the day drinking Vitamin C and zinc drinks, gargling paracetamol and getting lots of sleep. As the day went on I was feeling better and woke up on the Tuesday feeling loads better again. I was sensible with training that day and just did 2 very easy runs one of which was down at the lake so that the slightly lower altitude wasn’t as much of a stress on the body. By Wednesday I was back feeling my old self and headed up to the plateau to get chased by cows on my run!!

When I got back from my run Ian had received news from home that his Dad had fallen the night before and was quite poorly in intensive care so he had to rush home to be with him. We made the decision that I would stay and continue my preparations as there wasn’t much I could do back in Scotland. It didn’t mean I stopped worrying about him though.

By the Friday I felt pretty much back to normal health wise. My heart rate was back down, I’d had a few good nights sleep and the sore throat had cleared so we decided that I would try a bit of a tempo session. Instead of doing the planned 3x5miles I did 5x2miles and felt quite good on it. The pace was strong and I actually managed to pick it up as the reps went on which was positive. 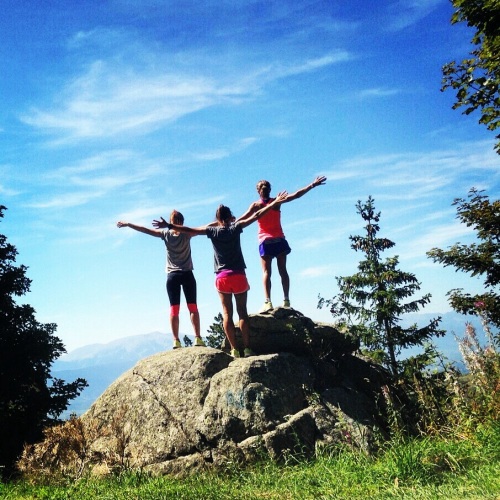 The view from the top is always worth the climb

Unfortunately when I got back I got a call from my mam to say that we had had some bad news in the family. My Uncle Derek had passed away very suddenly that morning. It was so sudden and unexpected I had to ask “Derek who?” when she told me. Needless to say everyone back home was very shocked and upset. It was my Dad’s brother and he hadn’t wanted me to know until I got back home this week but Mam had said I needed to know.

With my Dad and my Uncle both being runners my Dad wanted me to stay out in Font. He said that Uncle Derek would not have wanted me to interrupt my preparations for him. It was hard for me being so far away from my family at a time like this but it was my Dads wish for me to stay and make the most of the opportunity I had so I did. No doubt people will be thinking that it was selfish and self centred of me to not come home early and I suppose it was but it would have upset my Dad even more if I’d gone against his wishes and came home early. There was nothing I could do back at home and the funeral is not until next week so I am back for that. As my Dad said the best way to pay tribute to my Uncle is to make the most of my last week and smash Berlin. That would make him happy and proud, so thats what I plan on doing. 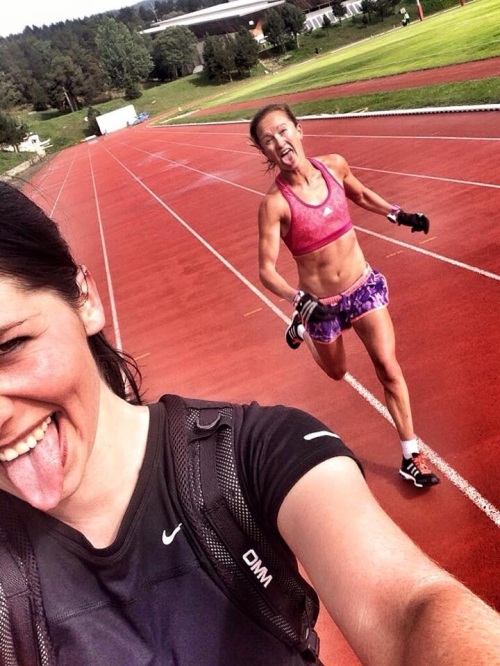 Having fun at the end of a track workout

Unfortunately all the bad news from home did get to me a little bit more than I thought. I hardly slept on the Friday night and felt truly awful on the Saturday morning run. My chest was tight, my nose was running more than my legs and my head just wasn’t in it. Emotional stress can have a huge impact on your body and trying to train hard through it can make things 100 times worse. When I got home after the morning run I decided that I needed a bit of a rest. I chatted things through with Paula to make sure that I wasn’t just being soft and she reassured me that I was doing the right thing and the rest would do me the world of good.

I spent the day relaxing as much as I could. I took a sleeping tablet that night and got a great 13 hours sleep in. I felt loads better the next day and it took me a lot of will power to not change my mind and crack on with my long run originally planned. I didn’t though! I knew that it could be the worst thing for me to do. I have no doubts that I could do it, that wasn’t in question. But the way I was feeling it could have dug me into a hole which I may not have gotten out of or I could have bombed and ran loads slower than previous weeks both of which would have ruined me both physically and mentally. So instead I had another rest day – 2.5 in one week, almost unheard of by me!! I enjoyed some sun and ate some Nutella crepes and woke up on Monday feeling all the better for it.

The rest of the UKa group left on Monday morning and I headed down to pick my two friends up from Barcelona airport. I’d been looking forward to having Rachel and Danielle out for my final few days as I knew that they would chill me out, we’d have a laugh together and everything wouldn’t be centred around running. They did exactly that!!

Unfortunately the weather took a turn for the worse and the glorious hot sunshine that we’d enjoyed for the last few weeks turned to cold, wet, grey skies. The weather on Wednesday morning was so bad that we couldn’t even see the track when I went up to do my session. Thankfully as the session went on the weather did clear and started to get a bit warmer. Which I think helped with my near 400m PB final rep!!

There is a track in there somewhere…

Thursday was my last long run. The girls had decided to support me by hiring bikes and cycling with me with my drinks and to give me some support as we went. When we got to the Lake the weather was terrible – cold, pouring down and generally not nice. So bad that the bike hire man hadn’t even bothered to come to open up. I don’t think he was too impressed when I rang him and said I wanted two bikes as he responded “but its raining!”

I’m now sat on the plane in Barcelona airport waiting for a take off slot after being delayed for 1h45m. Ironically its bad weather over the mountain flight path over the Spanish/French border which is holding us up!! Im looking forward to getting home and seeing everyone and mostly getting a great big cuddle from my nephew Charlie.

There’s no rest for me when I get home, I’m straight into a race at the Teespride 10k on Sunday morning. I’m looking forward to seeing how it goes. Going from my training I know I am in great shape so if the weather and everything is good I’m hoping for a PB. After that I’ve got another week of high miles with some goal marathon pace tempos in, including the Great North Run.

I’m also doing some lab tests to find out what pace I lie at when producing around 2 mmol of lactate as that is meant to give a very good indicator of marathon pace. The results of this together with the run out at the GNR will give me a firmer indication of target time and pace. The GNR is a perfect opportunity for me to have a final practice of race day drinks, kit etc. As I’m only running it at target marathon pace it will also be a good test of keeping my head and not going off too fast at the start. With Berlin being a mixed race there is a big chance of getting sucked along by men in the early stages so I need to know how my pace feels and be strong enough to stick with that rather than get into someone else’s pace.

Hopefully this block of training will come to fruit in Berlin and I will get the time I am after. If I do it will stand me in a good position for selection for next years Rio Olympics. The Olympics has been a big aim for the last 20 years and I think that next year is my best chance of eventually making it. I’ve put my heart and soul into giving myself the very best preparations, all I need now is to keep sensible the next few weeks and then run the race of my life at Berlin.

Working hard in the gym, it’s not just the miles that count

I’ve always said that I am not the most naturally talented runner out there but my talent is that my body can withstand the hard training load which I place on it to get the very best out of myself. I have put all of the hard work in. I’ve ran the miles, I’ve lifted the weights, strengthened my core and had hours of painful physio/massage. I’ve had some of the very best support around helping to guide me, now the only person who can stop me from achieving what I want in Berlin is me and I don’t plan on blowing it now…

See you on the other side!!

1 Response to Coming down…