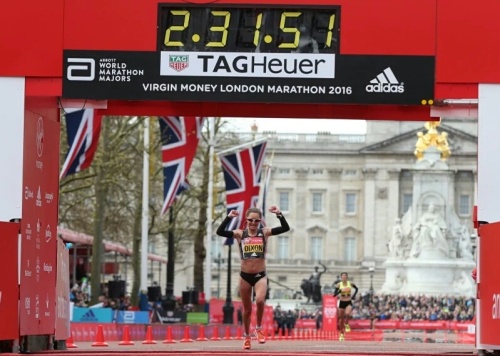 The moment 25 years of hard work and dreams come true…priceless!

I don’t really know where to start. I’M GOING TO THE OLYMPICS!!! 25 years of hard work and dreaming, all came to fruition on and boy does it feel good!!

Since crossing the finish line in the shadow of Buckingham Palace on Sunday morning, my life has been a total whirlwind. I’ve been passed from pillar to post with what seems like everyone wanting a piece of me. My phone has not stopped and it got to the point where I had to set up a call divert to ease the load. Thankfully things are starting to settle and what I’ve achieved is starting to sink in!

The race itself was amazing. Beforehand people where telling me that they couldn’t see me not making it but I know only too well that the marathon is a tough mistress and she can rip you apart at any given moment. I was confident but I wasn’t cocky and I certainly wasn’t taking anything for granted.

I had a game plan. Sit in on the first half and cover any moves the others make. Aim to get to 18 miles feeling good, strong and relaxed and then at 20 miles put in 3-4 hard miles if needed to try and break up anyone else who was still with me. 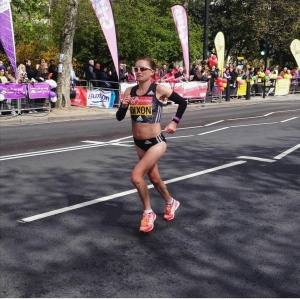 Running strong along the Embankment

The race played out just like that. I felt so so good in the first half, I was floating, relaxed, loving the crowd support. By 16 miles it was down to myself, Sonia and Charlie. At 20 miles I pushed on and Charle dropped off the pace. I held my effort through to 23 miles where I saw some of my club mates going crazy waving and shouting. I was still feeling so good that I gave them a thumbs up and a cheeky stick out of the tongue!

Going through the last few miles all I could think about was my Granda and my Uncle Derek and how proud and excited they would have been to see it. Coming up to 800 to go I knew I had to put in one last kick to get a gap and cross the line first Brit. Turning the corner into The Mall I looked at the giant screen and saw I had a gap. I knew my family were in the grandstand seating so I scanned along for them and spotted my Dad holding up a very excited Charlie (my nephew). I gave them a wave and shout of ‘I’ve done it’ and then the rest was a bit of a blur. I cross the line, threw my hands in the air, done a few fist pumps, managed not to swear live on the BBC and then got a red Virgin money towel thrown around my shoulders and told to pose for a load of photos. I’d done it, I’d achieved my lifelong dream, now was the time to enjoy it!

Sonia followed me over the line 8 seconds later. I gave her a big hug and kept repeating, ‘we’ve done it, we’re going to the Olympics’ she was in tears, I couldn’t stop smiling and laughing at it all.

As I tried to walk away my foot started to cramp so I sat on the kerb to take my shoe off and that was when my own tears started.. It hit me what I’d just done. You spend a lifetime dreaming about how this would feel but until it actually happens you can’t actually imagine it. I was suddenly alone, left to walk down to the media zone where a host of journalists where waiting for me. 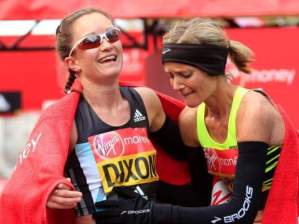 The mixture of emotions of two athletes reaching their dreams

There was microphones and cameras thrust in front of me. I didn’t know who I was talking. To or what I was saying, but the smile never left my face. I remember not being able to find the words to describe what I was feeling. I’m not often left gobsmacked but on Sunday I was.

Media eventually stopped and I finally got back to my bag and my kit. When I turned my phone on, I honestly thought it was going to explode. Instead of it bleeping to signal a message it was just one long bleep for about 10 minutes!! There was so many messages coming through that I couldn’t possibly keep up with them all. I’m still trying to go through the but I fear I’ve missed a lot. If I’ve missed your message, I am truly sorry but also very grateful that you took the time to send it.

After a few more interviews with the BBC we finally got to head back to the hotel via river taxis. By the time we got back my family had been hanging around for a few hours. I met them in the bar where we watched the final minutes of the SAFC v Arsenal game and I enjoyed a well earned beer, It wasn’t until the beer went straight to my head that I realised I’d had nothing to eat since 5.30 that morning!

I didn’t sleep that night. My head was buzzing and my legs were twitching. I ended up sat in the bathroom watching the race on BBC iPlayer at 3am on Monday morning. I finally got about 2-3hours sleep and woke up with what felt like the worst hangover ever. I hadn’t had that much to drink the night before but the come down from adrenaline and caffeine, plus dehydration had left me feeling rough. 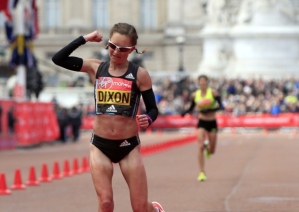 I spent most of the day pinching myself to make sure that it wasn’t just all a dream and texting people to ask if it had really happened. Seeing it in newspapers and on the news helped me believe it but I wasn’t getting too excited until I got the official phonecall and letter on Tuesday morning.

Since Tuesday I’ve spent my time doing lots of media. People said to me that becoming an Olympian is life changing but I never believed them until now. Everyone seems to want a piece of this little old lass from Sunderland just now and I’m enjoying every minute of it.

As for running, I’m currently taking a 10-14 day rest period. The Rio marathon is only 14 weeks away. I need to make sure that I am fully recovered both physically and mentally before I start back training. I’m using the time to try and relax and enjoy the moment, this is something I will never experience again and I want to soak up every second of it.

Unfortunately as I was celebrating the tragic news of a runner losing his life came through. Cpt David Seath collapsed at the 23 mile mark and sadly passed away later in hospital. My love and thoughts go out to his friends and family at this sad time and my first run back will be dedicated to his memory.

Of course, this Sunday is the Sunderland 10k and half marathon and I’ll be down there helping out. Today (Friday) I’m helping to pack the 4000 goody bags and on Sunday I will be the official race starter and then hand out the medals at the end.

To everyone who is running, this is the time for you to relax and prepare yourself for the day. All of your training has been done now. Don’t try and squeeze anymore in, make sure you get to the start-line feeling fresh and ready. Hopefully we won’t have weather like we did last year but just in are we do pack some old clothes which you can leave on until the last minutes and then throw away just before you start.

Remember to eat well in advance to avoid any unwanted stomach troubles. Water and sports drinks will be available on the course and current guidance says that you should drink to thirst rather than gulping down litres in fear of dehydrating. A few sips of water at each station is usually more than enough.

Good luck, enjoy yourself and I hope you achieve what you want to in your race. Don’t go off like Usain Bolt, remember to smile for the cameras as you go and please don’t throw up on me as I give you your medal!!

Once I saw BIg Ben I knew I was on the plane to RIo!

3 Responses to Dreams do come true…